In 2019 WSU police were called 150 times due to people being trapped in elevators on campus.

I was stuck in one of Old Main’s elevators toward the end of the Fall 2019 semester (a rare day that one worked). When I used the internal call system to request help, I was told that I couldn’t be in the elevator because it wasn’t working. I explained I was in fact in the elevator, that it happened to open for me, but that it wouldn’t move and wouldn’t reopen the doors to let me out. I was in their for roughly ten minutes (not a terrible amount of time but a wasted one) when the person on the other end of the emergency line did something to release the doors. But how ridiculous is it that we have failing elevators all across this campus AND people who will insist you’re not stuck in one because “it doesn’t work,” when you’re asking for them to help you get out?

The failure of WSU to maintain elevators, much less the buildings they’re housed in, is completely unacceptable.

Although I have not been trapped for an extended period in a WSU elevator, several of my students and fellow colleagues have had terrifying experiences in the Maccabees Building and the parking structures. This has caused them to be late for classes and meetings (not to mention the psychological toll these occurrences exact on each of them). My chiefest concern rests with students and faculty with physical disabilities; at any given moment, staircases may be the only way to access classrooms on the upper floors of our lecture halls. How are these individuals supposed to achieve academic success or perform their jobs in environments which fail to accommodate them?

If Wayne State prides itself as a welcoming campus, it must maintain its facilities!

I have completely stopped taking elevators in almost every building due to the lack of common sense and urgency displayed by WSU.

I know for a fact that the right side elevator in AAB is not working properly. You take it up to the 4th floor and you can feel the shaking and delay in the doors opening. Its like the elevator drops you a little then the door delay can really cause an episode for a person. I really wish WSU would stop being so reactive and become more proactive. I guarantee if someone dies on the elevator that changes will be made.

But why does it take WSU to take a black eye for us to make changes?

Yes, stop with the studies and start fixing.

Though my disability does not require me to utilize a wheel chair, the lack of functioning elevators as well as low number of handicapped parking both on the street and in the parking structures, has negatively affected my health, increasing symptoms that make it difficult to navigate campus. I have had to cancel meetings because of out of order elevators.

Wayne State University needs to do better with providing access and overall better experience for its disabled students and community.

I have a disabled client from TechTown who regularly comes to classes to support student learning at WSU. He’s been stuck in the State Hall elevators twice. Another time he was stuck on the second floor for 3 hours. We ate lunch and talked before the police were about to carry him down, when the elevator finally started working again.

I work in the biological sciences building, and at least one of the two elevators is broken a good fraction of the time. On some floors, the “up” button is actually wired for down, and has been this way for years … Additionally, even while in service the elevators often stop with a large gap between the elevator and floor, leaving a large tripping hazard. I usually park in structure II, and its elevators had seemingly all been broken for a long time.

One day I brought an esteemed colleague to Wayne State to give a seminar in our department. In the morning I picked them up from the hotel and brought them over to parking structure II. As it was a busy day near the beginning of the semester, we had to park on the upper levels at ~10am. As our guest had a large suitcase to haul, we attempted to use the elevators on the south side (broken), and then the elevators on the west side (also broken).

So our guest’s first experience at Wayne State was having to walk down many flights of stairs carrying a large suitcase because both elevators were broken. We are lucky that they weren’t handicapped!

The passenger elevators in the College of Pharmacy and Health Sciences have been out for at least two months.

Issues started in November and then one worked intermittently, but they have both been out for some time now.

There is a freight elevator that works, but it is not someplace you’d want to bring guests to the College.

2_503_morale
Commanders briefing the Long Range Training Calender to the men while countless UA chapters are about to spill out the broken barracks elevator behind them. #thegoldenticket #thewayout #crackiswack #fixtheelevators 1 Comments 144 Likes
Posted: 5 days ago

gthatgemini
waiting for the elevator #fixtheelevators tho 3 Comments 189 Likes
Posted: 6 days ago

AAUP-AFT Local 6075
aaupaft6075
#FixTheElevators TODAY someone stuck in the elevator without an emergency call button. No cell service for a bit. Terrifying! https://t.co/HJ0kC7xh7g 2 Retweets 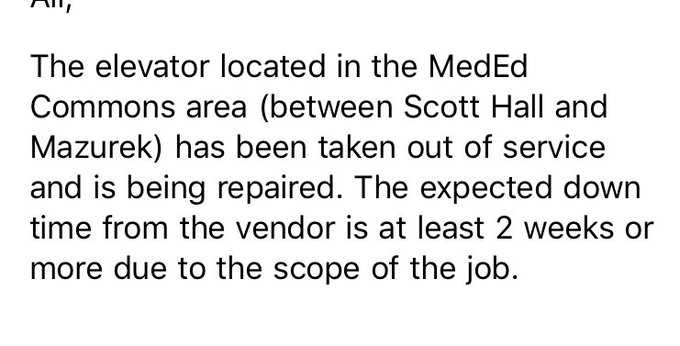 Harrison Cole
HaCole25
It is ridiculous that a university that makes as much money as it does, refuses to fix basic services like elevators on the basis of money, yet continues to increase pay to its administration, and continues to expect to be... 4 Retweets Wayne State Lecturers Retweeted
Posted: Last week

Harrison Cole
HaCole25
It is ridiculous that a university that makes as much money as it does, refuses to fix basic services like elevators on the basis of money, yet continues to increase pay to its administration, and continues to expect to be... 4 Retweets Gavin Redding 🚩 Retweeted
Posted: Last week

Harrison Cole
HaCole25
It is ridiculous that a university that makes as much money as it does, refuses to fix basic services like elevators on the basis of money, yet continues to increase pay to its administration, and continues to expect to be... 4 Retweets Hank 🌹 Retweeted
Posted: Last week

mz_bk_phoenix
Documenting.... One elevator again. Same one keeps getting stuck since like January. #fieldbridgeassociates #notontheirjob #Fixtheelevators @capitalone 2 Comments 5 Likes
Posted: Over a year ago

_kristen_ciara_
Made it up and down 8 flights in sandals OOOOOOO BUT TOMORROW STRAIGHT NIKE SHOES 😠😩 #Fixtheelevators 11 Likes
Posted: Over a year ago

mz_bk_phoenix
EBBETS FIELD TENANTS MEETING WEDS MAY 2ND 2018 @7PM .....
LISTEN Y'ALL NEED TO SHOW UP AND DO YOUR PART. DON'T COMPLAIN, AND YOU'RE DOING NOTHING ABOUT IT. IF YOU LIVE HERE, OR YOUR FOLKS STILL LIVE HERE, SHOW UP! ... 1 Comments 15 Likes
Posted: Over a year ago

psyndicated
Does this mean the two elevators in the west wing of King Hall can finally be fixed? Disabled students would like to KNOW!!!!!! As would other inquiring minds. MLK would've got them fixed by now! They were broke all Summer. ... 4 Likes
Posted: Over 2 years ago

mizz_nicoya
Yep, that's what I want to do at 7:30 in the morning while half awake is climb 4 flights of stairs with 3 bags and a cup of tea. Good morning! 🙄 3 Comments 30 Likes
Posted: A long while ago

wanderingblaze
Getting ready to enter the caverns at Carlsbad Caverns with Dad and @alans1987 on 8/13/16. Little did we know we'd be sharing the adventure of descent with the thousand sweaty people hiking back out. Gotta love the government getting right ... 34 Likes
Posted: A long while ago

70
Over 70 people have shared their experiences here at this google form: